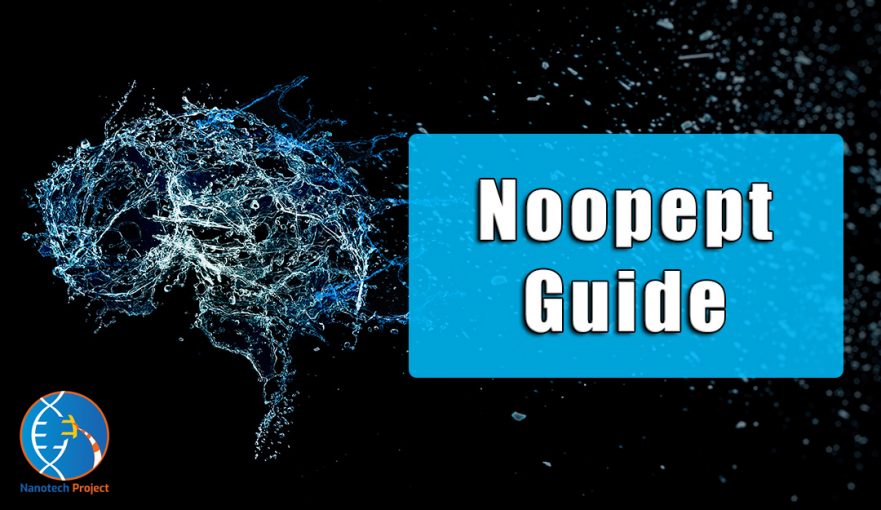 Nootropics are a fascinating new class of compounds that have been growing in popularity over the past several years, and it isn’t hard to see why.

The idea that you can take a pill, and immediately experience an increase in brain power, memory, and focus, is very appealing to most people.

One popular nootropic, known as Noopept, has been sweeping the nootropics community by storm—but does it really work, though?

In this article, we’ll explore the science behind Noopept, and uncover the best dosage, how to use it, and the clinically proven health benefits, as well.

Noopept is a nootropic that was developed in the mid-1990’s, with the goal of being a more bioavailable version of a drug called Piracetam. [R]

Researchers noted that Piracetam had phenomenal effects as a nootropic, such as increased memory, better focus, less anxiety, and more.

The problem, however, was that Piracetam required a very large dose in order to work, and didn’t always work on the target population.

So, as a consequence, researchers developed Noopept, as a more effective, more potent, and more bioavailable version of Piracetam.

To this day, Noopept, otherwise known as GVS-111 or Ноопепт by its Russian developers, remains one of the most popular nootropics out there.

Before we explore the PubMed studies on this compound, we’d like to first offer an overview of the pros & cons of using Noopept as a nootropic.

Potential Side Effects Include:

Most people who suffer from Noopept side effects are simply taking too much, or have a deficiency in choline. In fact, simply supplementing with choline can reduce the vast majority of these drawbacks in users.

How Does Noopept Work?

While the mechanism of action of Noopept is still being studied, researchers believe that it works on the acetyl choline system in the brain. [R]

Acetyl choline is a critical neurotransmitter that aids in the communication of brain cells—it’s so important that without it, you would die in seconds.

By enhancing the way that acetyl choline works in the brain, Noopept is able to improve working memory, your ability to focus, and much, much more.

In addition to acting on the acetyl choline system, it’s theorized that Noopept affects AMPA and NMDA receptors as well, which explains its effects. [R]

One common mistake that people make is they think Noopept is the same as piracetam. In fact, piracetam and Noopept are two entirely different drugs.

Don’t misunderstand—piracetam and Noopept are also very similar. They are both water soluble. They both enhance memory. They both will improve brain fog symptoms, and help boost your focus.

Here’s where they’re different, though. Think of Noopept as a far more concentrated form of piracetam. So effective, in fact, that you would have to take up to 1,000 times more piracetam to get the same effect as Noopept.

In short, Noopept is a far more effective nootropic than piracetam.

You’re probably wondering what it feels like to be on this new drug, and I was, too—which is exactly why I bought some Noopept. I wanted to see how it would affect my brain, my cognitive function, and more.

I started by taking 10 mg of Noopept per day (from Pure Rawz), and did notice some benefits, but in order to get the most benefits of Noopept I decided to start taking 30 mg per day, which is definitely on the higher end of things.

Here’s what I experienced while taking 30 mg of Noopept per day:

This is what Noopept felt like to me, and while I can’t guarantee you’ll feel the same way, there’s a lot of clinical data showing that these effects of Noopept are actually scientifically proven and verified.

As a nootropic, Noopept has a very wide range of cognitive benefits, which explains why it’s so popular these days among students & bio-hackers alike. Noopept is the busy entrepreneur’s, executive’s, and student’s best friend.

While it’s important to note that more research should be done on Noopept, the vast majority of preliminary research suggests it is very safe in users. I also found that I tolerated Noopept very well when taking 30 mg per day of it.

Here are some benefits of Noopept:

If these Noopept benefits impress you, then good—but that’s not even the most impressive benefit. Studies show that Noopept may even help prevent Alzheimer’s disease, by preventing cell death in the brain. [R]

Perhaps one of the most profound effects of Noopept is its ability to enhance memory in users—I experienced this myself, as well. When I was taking Noopept I found that it was WAY easier to remember things.

Out of all the nootropics in the world, only a few have actual clinical research and studies proving their effects on the brain—and thankfully, Noopept is one of those nootropics.

Ample evidence suggests that simply taking 20 mg of Noopept several times per day can drastically increase memory, especially in those who suffer from brain degenerative disorders, like Alzheimer’s.

When I take Noopept, I personally feel this effect a whole lot—and again, thankfully, a lot of evidence suggests that Noopept has profound cognitive boosting effects as a nootropic.

A simple dose of 20 mg of Noopept taken several times per day has been shown to drastically improve cognitive abilities in animal and human studies.

Perhaps the best effect when you take Noopept is the enhanced sense of focus that you get—it removes any and all brain fog you could ever have.

Even a small dose of Noopept has the potential to drastically affect your focus and memory, by enhancing how acetyl choline works in brain.

As we said before, acetyl choline is a critical neurotransmitter that is good for just about anything brain related—memory, focus, learning, and more.

So, when you take Noopept, it works by improving the way that your acetyl choline neurotransmitters work, which means a ton of extra focus.

One of the biggest benefits I personally noticed when taking Noopept, was its ability to remove any and all brain fog that I had—and I didn’t even think I had that much to begin with, until I started taking Noopept.

After taking just 30 mg per day of Noopept, I started noticing that my brain was operating at a much higher level. Things were more clear, and that pesky brain fog and fatigue that was always in the background went away.

I highly recommend Noopept for anyone who wants to get rid of brain fog, and even if you don’t think you have any, after trying Noopept for just a couple of weeks you’ll start to realize how much brain fog you had to begin with.

After hearing all the incredible effects of Noopept, from enhanced memory to better focus, and more, I decided to take it and see for myself what it did. I ordered a few vials of Noopept, and started taking it the day it arrived in the mail.

Overall, I was not disappointed by this nootropic. It took a few days to kick in, but once it did, I noticed far less brain fog, way more memory, way better focus, and just a general feeling of euphoria, too.

For my Noopept dose I took 0.1ml (or 10% of a full dropper from Pure Rawz), 3x per day, which works out to a dose of roughly 20 mg taken 3x per day. I took my dose in the morning (before the gym), afternoon, and evening (after dinner).

Their stuff is EXTREMELY highly dosed, which makes it a very good deal, but means you should also be price when measuring out your Noopept dosage.

Within a few days I began to feel like my brain could take in more information and actually remember it. I noticed that my overall cognitive abilities got a slight boost—not massive, but enough to notice.

Then, after about a month of consistent Noopept use, the effects were in full force; better memory, focus, productivity, less brain fog, and much more. Noopept was absolutely a game-changer for me.

Overall, I think Noopept is a great nootropic for anyone who wants to take their life to the next level—you can get it here online from Pure Rawz (the place I get mine from also).

As previously stated, Noopept is a far more potent version of the Racetam family, so the dosage required to achieve these benefits is far less.

According to most research, as well as anecdotal evidence, the recommended Noopept dosage can vary from 30 mg to 120 mg per day.

Here is the recommended Noopept dose based on experience:

Due to the fast-acting nature of Noopept, it’s recommended that you split your dose up throughout the day, to maintain an even level in the body.

For beginners, we recommend you purchase a vial of Noopept from Pure Rawz, and start by taking 10% of a full dropper (which is 20 mg) 3x per day.

A nootropics stack is where you take multiple nootropics to get the most benefits and positive effects possible, with minimal side effects as well.

Thankfully, it’s easy to stack Noopept with a ton of different nootropics, and experience a ton of powerful, brain boosting effects—if you know how.

Here are some good nootropics to stack with Noopept:

Most people stack Noopept with some kind of choline supplement, because when you take Noopept it tends to reduce choline levels in the brain. [R]

Where to Buy Noopept

While there’s many places to buy Noopept online, the vast majority of vendors don’t sell high quality nootropics, and some even sell fake junk.

Our #1 recommended vendor for research chemicals is Pure Rawz, due to their great prices, product purity, fast shipping, and great customer support.

In fact, Pure Rawz has one of the most rigorous and intensive 3rd party verification processes we’ve ever seen. Each batch is tested for purity by an independent lab, so you know what you’re getting is at least 99% pure.

Best of all, if you use the coupon code “nano20” you’ll save 20% off your first order—so go add a vial of Noopept to your cart and test it out yourself.

Thankfully, Noopept is a relatively safe and well-researched drug, so the vast majority of users who take Noopept within the recommended dosage range experience little to no side effects, if any at all.

That being said, here are some potential side effects of Noopept:

Most of the time when people experience these side effects, it’s because they’re either taking too much Noopept, or are deficient in choline.

That’s why it’s always good to take a choline supplement (available to purchase from Pure Rawz) when you supplement with Noopept.

In conclusion, Noopept is a powerful nootropic that has a wide variety of benefits, ranging from better memory, to more cognition and focus. I have personally experienced the powerful benefits that Noopept has to offer, and if you take the time to try it yourself, you will, too.

While some users may experience side effects on Noopept, the vast majority of reviews and studies suggest that it’s very safe when used properly, within the recommended dosages we outlined in this article.

If you would like to try some Noopept for yourself, head over to Pure Rawz and use the code “nano20” to save 20% off your entire order. They’re our #1 recommended source for Noopept, nootropics, SARMs, and other cutting-edge research chemicals.

As always, let us know in the comments section down below if you have any questions. We hope you enjoyed our article, and that you subscribe for more!