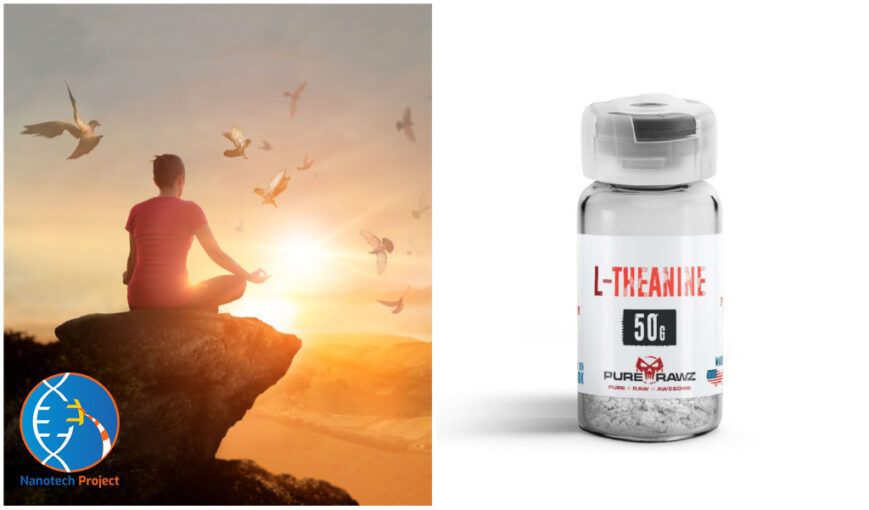 L-Theanine is an amino acid found in green and black tea that is potentially one of the best and most versatile nootropics on the market right now (and also one of the safest, too).

L-Theanine can easily be combined with other nootropics for a stack, as well. In fact, due to its anti-anxiety properties, L-Theanine pairs well with almost any stimulating nootropic to level off the jitters.

This article will tell you everything you need to know about L-Theanine. We’ll kick things off by discussing what this amino acid is and how it works. Next, we’ll turn our attention to its proven benefits, side effects, and the dosage at which L-Theanine is most effective.

L-Theanine is a non-protein amino acid and nootropic found in green and black tea and some mushrooms. It was first discovered in tea leaves in 1949 by Yajiro Sakato in Kyoto, Japan. Currently, L-Theanine is clinically used in Japan to treat stress, anxiety, depression, and various other conditions.

L-Theanine is an analogue of glutamine, the most abundant amino acid found in the body. But unlike glutamine, this amino acid isn’t endogenously produced. It has to be taken from outside. A 2011 study found that one cup of black tea (200ml) contains 24mg of L-Theanine. [R]

Although it’s found in tea, L-Theanine has opposite effects on your brain. For instance, while caffeine promotes alertness, this amino acid tends to induce relaxation. Still, despite their differences, studies suggest that taking L-Theanine and caffeine together can be beneficial. [R]

In studies, L-Theanine has demonstrated the ability to reduce anxiety and depression. This amino acid has also exhibited a unique property of promoting relaxing effects without sedation. L-Theanine may also improve verbal fluency, executive function, attention, and sleep quality.

How Does L-Theanine Work?

L-Theanine has been proven to penetrate the blood-brain barrier, which is a system of blood vessels that tightly controls the two-way movement of ions, molecules and cells. Once in the brain, it targets brain chemicals that regulate attention, arousal, anxiety, and pleasure. [R]

L Theanine has been shown to:

This functional food additive has also been shown to increase glutathione levels, a powerful antioxidant found in every cell in the body. Increased glutathione levels may reduce your risk of diabetes, prevent cancer progression, and reduce cell damage in liver disease. [R][R]

Why Do You Need L-Theanine?

As you get older, you may find that:

L-Theanine can help resolve all these issues. In addition, this supplement may protect you from neurodegenerative diseases associated with aging. Put simply, if you want to protect or elevate your quality of life, taking L-Theanine daily must be on top of your to-do list.

You should also consider combining it with something that has anti-aging properties, like TB 500 for example, or other peptides we’ve reviewed that encourage youthful energy and rejuvenation.

Here are the major differences between L-Theanine and D-Theanine:

In one study, equal amounts of ‘L’ and ‘D’ forms were given separately to mammals. Final results showed that three times more L-Theanine was absorbed in the bloodstream than the ‘D’ form. L-Theanine also exhibited greater absorption capacity when administered alongside the ‘D’ form. [R]

Although both these amino acids are isomers of Theanine, it has been shown that the ‘D’ form excretes more readily than L-Theanine. For instance, in a cell-based study, the rate of excretion of D-Theanine was 10 to 15 times higher than that of L-Theanine. [R]

Regardless of whether they’re administered separately or simultaneously, L-Theanine lasts longer in the bloodstream than the ‘D’ form. Its ability to linger around for an extended period means that the effects of L-Theanine will also last for a relatively long time. [R]

4) D-Theanine may present a health risk

According to a study conducted by researchers at Iowa State University, D-Theanine can inhibit the body’s absorption of L-Theanine and may present a health risk to consumers. In contrast, doses of up to 900 mg daily of L-Theanine have been used safely for 8 weeks. [R]

The US Food and Drug Administration has granted L-Theanine the ‘Generally Recognized As Safe’ (GRAS) status. As a result, this amino acid is sold as a dietary supplement in the US. In contrast, D-Theanine hasn’t been granted regulatory approval anywhere in the world.

L-Theanine reduces anxiety and depression, improves sleep quality, and enhances concentration, making it a phenomenal choice to pair with a whole host of other nootropics such as Fladrafinil or Alpha GPC.

This amino acid also boosts various brain functions and immunity. Aside from that, it prevents blood pressure increase caused by stress or caffeine intake.

Here are the proven effects of the L-Theanine supplement:

a) In healthy adults

In three clinical trials, L-Theanine reduced stress and anxiety. All three trials involved healthy people who were administered this amino acid before or while performing a stressful task. [R][R][R]

b) In patients with MDD or schizophrenia

According to a clinical trial involving patients with major depressive disorder (MDD), L-Theanine, when given alongside an anxiolytic medication, reduced anxiety, cognitive impairment, and sleep disorders. [R]

In 2 trials involving patients with schizophrenia, L-Theanine reduced anxiety and other symptoms when the drug was given alongside antipsychotic medication. However, in another trial, it didn’t reduce anxiety in patients with generalized anxiety disorder (GAD). [R][R]

A double-blind, placebo-controlled reported that L-Theanine may improve attention, working memory, and clinical function in healthy adults. Another clinical study showed that 50 mg/day of L-Theanine has a significant effect on mental alertness and arousal. [R] [R]

L-Theanine may help alleviate multiple ADHD symptoms, such as:

When administered alone in a separate trial, L-Theanine (400 mg/day) improved sleep quality in boys with ADHD. This effect of L-Theanine is significant as up to 70 percent of children with ADHD reportedly experience some kind of sleeping troubles at night. [R][R]

In 4 clinical trials on 66 athletes, L-Theanine (both alone and combined with L-Cystine) reversed the imbalance between white blood cells and immune cells caused by intense exercise. If not treated, this imbalance leads to inflammation and immunosuppression. [R][R][R][R]

Another trial found that L-Theanine, both alone and in combination with L-Cystine, strengthened the immune system. This effect was measured by a reduced incidence of flu and the common cold. Another trial reported that this combination improved the efficacy of flu vaccination. [R][R]

L-Theanine can also be used in disease prevention, such as:

In addition to improving sleep quality, L-Theanine may also decrease sleep disturbances, especially the ones caused by mental conditions. For instance, the drug improved sleep percentage and efficiency in 100 boys with ADHD, 20 people with MDD, and 17 schizophrenia patients. [R][R][R]

According to a clinical trial involving 20 people with major depressive disorder, L-Theanine, when given alongside a conventional antidepressant, alleviated depression symptoms, cognitive impairments sleep disturbances, and anxiety. L-Theanine administration was also deemed to be safe. [R]

L-Theanine is potentially one of the safest, most well-researched, and most side-effect free nootropic supplements that is currently out there right now. Almost no side effects exist.

I’ve personally been taking L-Theanine in my nootropics stacks for the past decade and have never had a single side effect, even when taking as much as 2 grams per day (2,000mg per day).

Again, I don’t think this is likely, and the research suggests that the vast majority of individuals who use L-Theanine don’t experience any side effects, but it’s better you’re aware than not.

The L-Theanine dosage that’s best for you will depend largely on what effect you want to have, if you’re combining it with other nootropics, and many other factors.

That being said, here are the best L Theanine dosages:

I typically take around 200-300mg of L-Theanine per day, because I drink it with my coffee. It’s a phenomenal nootropic drug to stack with caffeine, because it really levels off the anxiety many people can get from consuming a lot of caffeine.

Health experts state that L-Theanine is probably safe when taken for the short term. In clinical studies, doses of up to 900 mg/day have been taken with no reports of severe adverse effects.

According to a pre-clinical study, L-Theanine enhances recovery of behavioral motor function after spinal cord injury. However, this effect needs to be verified by clinical studies. [R]

Various studies have shown that L-Theanine increases brain serotonin concentration, dopamine levels, and the levels and activity of GABA.

Yes. Two studies have shown that the neuroprotective effects of L-Theanine stem from its structural analogy to glutamate, a brain chemical related to memory. [R][R]

Various studies have shown that combined treatment with L Theanine and caffeine improves cognitive performance in healthy adults as well as those with neurocognitive disorders.

In summary, L-Theanine is a great nootropic supplement that has phenomenal anti-anxiety properties and is great to stack with almost any nootropic out there.

You can stack it with coffee, caffeine, pre-workouts, aniracetam, piracetam, and any number of other compounds. It’s very safe, has been proven to work many times, and has almost no side effects.

If you’re looking to get the best quality products, we recommend you check out the L-Theanine for sale from PureRawz. Every batch is 3rd party tested, which few companies do, ensuring product purity.

You can also use the code “MD15” for 15% off your purchase of L-Theanine. Just click that link, enter in the discount code, and you’ll get 15% off your entire order (not just L-Theanine!)