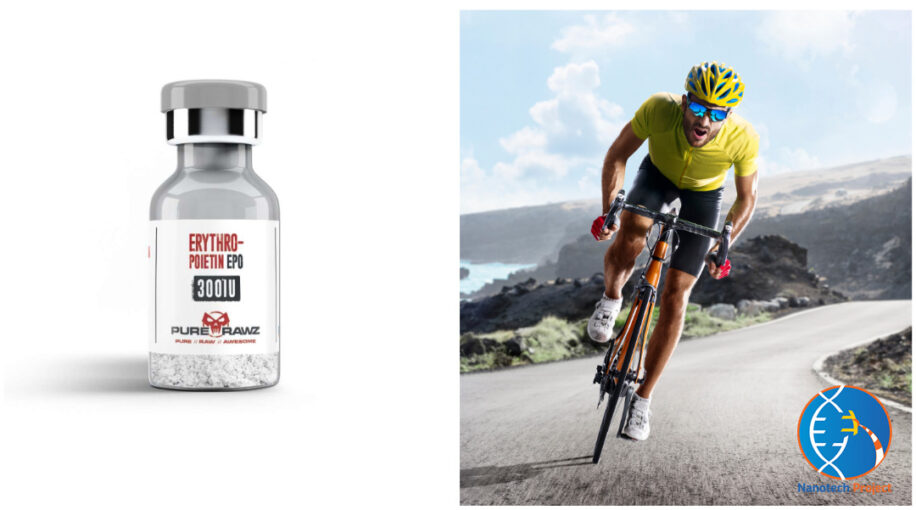 Erythropoietin contributed to the rise and fall of Lance Armstrong. The seven-time Tour de France champion once admitted that if it weren’t for this drug, it would have been impossible for him to win the titles that he did, with this admission costing him his legacy.

Despite being the drug of choice of arguably the most famous cyclist in history, few people know what Erythropoietin, or EPO, is and what it does to the body. Even fewer people are aware of another thing about EPO: this substance is produced naturally by your body.

Erythropoietin is a hormone produced mainly in your kidneys. At the time of reading, it is busy stimulating the production of red blood cells in your system. How can we be so sure? If your erythropoietin levels were down, you wouldn’t be sitting in a carefree and easy way.

That is because EPO stimulates red blood cell production to prevent your oxygen levels from falling, a condition which leads to shortness of breath, headache, and confusion. Read on to learn more about Erythropoietin and the benefits you could get by supplementing it.

This compound is known for its endurance-enhancing effects, similar to Cardarine (GW-501516), except instead of acting on PPAR Delta receptors, it acts by increasing red blood cells and oxygen in the blood.

Given its importance to your overall health, your body uses a dynamic feedback system to maintain sufficient EPO levels. The body stimulates erythropoietin production in response to low oxygen levels, which are a clear indication of below par red blood cells.

How Does Erythropoietin Work?

Research shows that the target cells of EPO action are erythroid progenitor cells. These cells are located in the bone marrow, each hosting an erythropoietin receptor. EPO only acts on these cells when they are in the later stages of their development. [R]

This enables EPO to save the erythroid progenitor cells from aging-induced death. This is important as cell death (apoptosis) is one of the major causes of aging and age-related diseases. All in all, then, EPO carries out several crucial functions in the body.

Supplementing EPO can provide you with various benefits, all of which stem from this drug’s ability to increase red blood cell production in the body. The most famous of its benefits are increased endurance and stamina, which is why Lance Armstrong doped EPO.

Studies have further shown that this drug can protect you from intraventricular brain hemorrhage (IVH), a condition in which the brain is filled with blood. IVH is an extension of brain hemorrhage, with an expected mortality (death) rate of between 50% and 80%.

There are two more conditions against which erythropoietin has exhibited huge promise in clinical trials and studies. These include oral mucositis (a complication of chemotherapy that causes tissue swelling in the mouth) and a condition characterized by receding gums.

Here are the various research-backed benefits of recombinant erythropoietin:

EPO increases endurance by increasing the oxygen-carrying ability of the blood.

Human blood is made up of two major components – cells and plasma. Plasma – mostly water and carries nutrients and proteins – makes up 55% of the blood’s volume. The remaining 45% are cells, among which the majority are red blood cells.

The major function of red blood cells is to carry oxygen. That means the greater the number of RBCs, the higher the oxygen supply to every body part. So, when it increases RBC levels, EPO increases oxygen supply to the muscles, increasing your stamina. [R]

This synthetic drug also has a performance-enhancing effect on the brain, increasing motivation. And it isn’t just any kind of motivation. A group of researchers from the University of Zurich have found that EPO in the brain triggers a motivation boost to increase physical performance. [R]

This means that where on one end, EPO provides your body with the extra fuel to spend more time doing grueling workouts in the gym. On the other end, this drug keeps your drug from giving up, uniting the body and mind in the joint pursuit of increased physical excellence.

Feel like your wounds take an eternity to heal? Then you have an extra incentive to take EPO.

A clinical study has reported that EPO expedited the healing time and reduced inflammation in patients who had just undergone gingival graft surgery. This surgery is performed on people with receding gums, with a recovery time that could take as many as two weeks. [R]

Another study reported that this drug enhanced healing time from oral mucositis, a complication of chemotherapy and radiation therapy that causes blisters in the mouth. [R]

Research shows that EPO could protect your brain from various injuries.

In a clinical study involving 200 low birth-weight infants, this drug was seen to protect the brain from intraventricular brain hemorrhage, a condition with a mortality rate of between 50% and 80%. [R]

Another study on newborns indicated that EPO might protect the brain against hypoxic-ischemic encephalopathy (HIE), a condition borne out of reduced blood and oxygen flow to the brain. [R]

Erythropoietin Before and After

Former professional cyclists estimate that you get about a “10% bump in performance from EPO”, which can make all the difference in competitive sports, where even a 1% improvement in physical performance can distinguish the winners from the also-rans. [R]

Multiple users claim that dosing with EPO “increased their cardio performance”. However, they recommend regular blood tests if you’re blood doping. Stop using this drug immediately if your hematocrit levels (ratio of red blood cells to total blood) are near 50%.

This dosage will substantially increase the oxygen supply (O2max) and the time to exhaustion. You’ll therefore be able to work out for longer periods without stressing your muscles to the point of fatigue, outperforming your counterparts not dosing EPO.

How to Take EPO?

You can inject EPO subcutaneously (under the skin) or into your veins. Subcutaneous EPO injections are usually given into the thigh or tummy.

Most athletes often follow EPO injections with saline injections – directly adding salt water to the blood through an IV. They do so to prevent any upcoming drug test from detecting their usage of EPO. Here’s why this method is incredibly successful at evading drug tests. [R]

Where to Buy Erythropoietin?

Pure Rawz is the best place to buy Erythropoietin online.

Doping with EPO can result in abnormally high amounts of hemoglobin, which thickens the blood and increases the risk of serious side effects, such as:

As long as you stay within the recommended dosages however, everything should be fine.

Erythropoietin is a synthetic version of the natural hormone, increasing stamina and endurance and boosting motivation for physical performance when injected.

Furthermore, multiple studies have shown that recombinant EPO can reduce the need for blood transfusions in patients undergoing surgeries with anticipated blood loss. This drug has also shown efficacy for patients with low oxygen levels due to lung disease.

However, its side effects (noted above) are too severe to ignore. It’s therefore recommended to get regular blood tests done if you’re dosing EPO. If a blood sample/blood test indicates that your hematocrit levels are close to 50%, stop using this drug for your safety.

If you want to buy the best, purest Erythropoietin for sale, be sure to get it from PureRawz. Each batch is 3rd party tested for the utmost purity and quality standards. Use code “MD15” for 15% off.