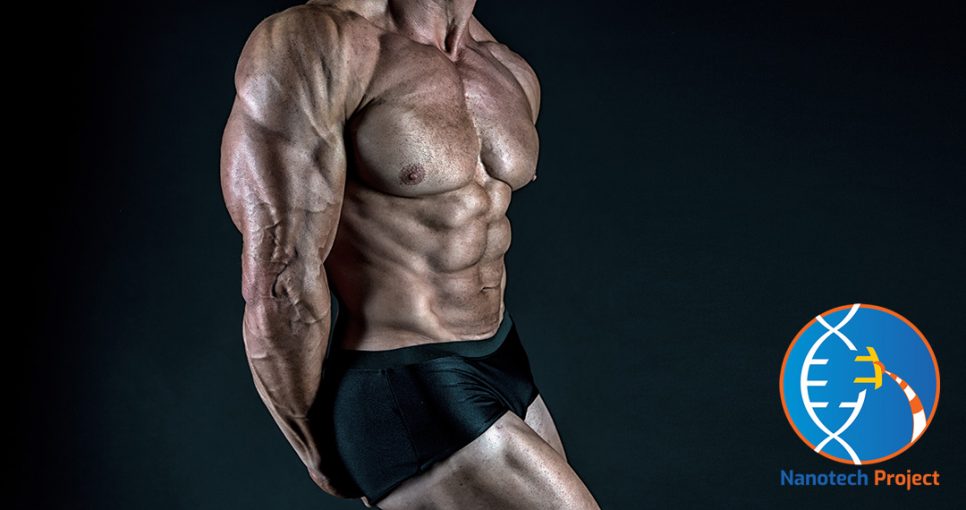 Ibutamoren, otherwise known as MK 677, is a research chemical that increases human growth hormone (HGH) in the body.

While it was initially developed to treat growth hormone deficiency, many bodybuilders have started using MK 677 to build muscle and recover faster.

In this article we will cover the clinical research regarding Ibutamoren, exploring potential dosages, benefits, cycle results, and more.

Ibutamoren, often referred to by its research name MK-677, is often grouped together with SARMs, although technically it isn’t a SARM.

Initially, Ibutamoren was developed as a potential treatment for children and elderly people suffering from growth hormone deficiencies. [R]

That being said, bodybuilders quickly discovered that if a healthy person takes MK 677, they will experience rapid muscle growth and recovery.

MK 677 mimics the action of the hormone ghrelin in the body.

In the brain’s hypothalamus region, it binds to ghrelin receptors, stimulating the release of human growth hormone or HGH. MK 677 also stimulates growth hormone secretagogue receptors and inhibits the activity of Somatostatin (the hormone that inhibits HGH). [R]

Aside from that, MK 677 has been shown to increase insulin-like growth factor (IGF-1) levels in the body. In patients with Alzheimer’s disease, a daily dose of 25 mg of MK 677 produced a 72% increase in serum IGF-1 levels at 12 months. [R]

Despite the fact that MK-677 is often sold alongside SARMs, it is actually not a SARM, but rather a growth hormone (GH) secretagogue, being explored as an experimental treatment for those with low GH levels.

Because it is not a SARM, Ibutamoren will not lower testosterone levels or testosterone production, and thus does not require a post cycle therapy.

While more clinical research should be done on the benefits and long term side effects of MK 677, there’s a lot of anecdotal evidence out there.

Many people use MK 677 for bodybuilding, even though it isn’t technically approved for human use (yet)—and they report a number of effects.

Here are some benefits of MK 677 (Ibutamoren):

Because Ibutamoren (MK677) increases human growth hormone (HGH) in users, they can expect all the benefits that come from having more of it.

Perhaps the biggest benefit of MK 677 is that it increases growth hormone production by a significant amount, which leads to many of its other proven benefits. [R]

In fact, some proponents of this product even claim that it has anti-aging properties, and can be used in a number of treatments for metabolic diseases.

Prolonged treatment with high doses of MK 677 has been shown to improve sleep quality.

In a study involving healthy young and older subjects, MK 677 increased REM sleep by 50% and decreased deviations from normal sleep by 42%. [R]

REM sleep is crucial to your sleep cycle. It stimulates areas of the brain responsible for learning and making memories.

MK 677 has been shown to increase lean muscle mass in healthy obese men.

Twenty four participants who took 25 mg/day of MK 677 for 8 weeks saw a visible increase in lean muscle mass at the study’s conclusion. [R]

This shouldn’t come as a surprise since MK 677 increases GH and IGF-1 levels. Both these hormones, in turn, have been proven to enhance muscle growth. [R]

MK 677 has been shown to increase bone density in females as well as males.

In a study involving postmenopausal women, MK 677 significantly increased bone mineral density at the femoral neck (the most common location for a hip fracture). [R]

MK 677 treatment also increased bone turnover in twenty-four healthy obese males. An increase in bone turnover enhances bone mineral density, albeit after some time (over a period of 12 months). [R]

Multiple healthy volunteers were put on a caloric-restricted diet for 28 days. Those who took MK 677 (25 mg/day) for the last 7 days experienced reduced muscle wasting than their counterparts on a placebo. [R]

In another study, patients recovering from a hip fracture were given a placebo or 25 mg/day of MK 677. The latter group experienced increased muscle strength. [R]

Because MK-677 increases growth hormone in users who take it, users can expect to rapidly build muscle, far faster than you could naturally.

Many of the MK 677 results reported on Reddit involve users gaining very large amounts of muscle, and radically transforming their physiques.

In fact, many recreational bodybuilding cycle logs report gaining over 10-15 pounds of muscle from one 12 week cycle of Ibutamoren.

Users in particular who have a hard time sleeping or eating enough to bulk up will benefit a lot from MK 677, as it’s a phenomenal bulking compound.

If you’re curious and want to learn more, go check out our full write up on the different SARMs before and after results you can expect to get from not only MK 677, but every other SARM, too.

Even a small dose of MK 677 has a very positive effect on growth hormone levels, overall muscle growth, REM sleep quality, and much more.

However, the most common MK-677 dose is 25 mg per day. That being said, the more you take, up to a point, the more benefits you will likely get.

This means that, if your primary concern is growth hormone increase, a moderate dosage of 10-25 mg per day of MK 677 would be just fine.

Liquid SARMs and research chemicals are dosed in mg/ml, so taking 30 mg of MK 677 is equal to one full dropper of liquid MK-677 from Pure Rawz.

MK677 is a phenomenal bulking SARM and is often stacked with other SARMs, such as RAD 140 or Ligandrol, to bulk up faster.

Because MK-677 increases growth hormone, it’s primarily best for a bulking stack, however it can also be used to retain lean muscle mass while cutting. That being said, in our personal opinion, this is best for users trying to gain mass, because MK 677 is one of the best SARMs for bulking that there is.

Users may choose to combine this research drug with a SARMs such as Ostarine or Cardarine for cutting, and Ligandrol or RAD 140 for bulking.

Many studies have shown that even long-term usage of MK-677 is generally well tolerated, without any seriously concerning side effects [R].

Here are some potential MK 677 side effects:

Ibutamoren is also known for causing increased water retention, which is a common side effect of increased HGH levels—this makes it more suited towards bulking than cutting.

It’s generally considered to be a good wet bulking compound for body building, helping users put on muscle mass and get bigger.

If you want to purchase 3rd party verified, 99% pure MK 677, we recommend going through a high quality source like Pure Rawz.

All of their SARMs and research chemicals are tested by an independent lab for purity, and if you use the code “MD15” you’ll get 15% off your order.

MK-677 or Ibutamoren for short, is a powerful growth hormone secretagogue which bodybuilders love to use during a bulking season. MK-677 is known for increasing growth hormone, which improves recovery, muscle growth, fat loss, and even enhances sleep.

MK-677 (Ibutamoren) is a ghrelin receptor agonist, which means that shortly after ingestion it binds to the ghrelin receptors. From here, it signals the body to start producing more growth hormone (GH) and insulin-like growth factor 1 (IGF-1), leading to extreme muscle growth.

Ibutamoren (MK 677) is typically used for bulking, although it can also be used for cutting and recomposition. Being a growth hormone secretagogue, MK 677 is technically not a SARM, but bodybuilders still love using it to build muscle and recover rapidly after workouts.

The recommended dosage range for MK-677 is quite wide, ranging from 10-50mg per day. That being said, most medical professionals believe that 25mg per day is the best Ibutamoren dosage for beginners to get great results with the least amount of side effects possible.

Because MK-677 is a ghrelin receptor agonist and a growth hormone secretagogue, it does not require a PCT (post cycle therapy) like SARMs would. If you take it with SARMs, as some people choose to do, however, be sure to follow a proper post cycle therapy protocol.

❓ Is MK-677 A Growth Hormone-Releasing Peptide?

MK 677 is a GH releasing peptide-mimetic, meaning it biologically mimics the action of proteins that increase GH levels in the body.

Clinical trials have shown that MK 677 could increase IGF 1 levels by as much as 72.9%. IGF-1 is beneficial for the body as it reverses diet-induced catabolism. Aside from that, baseline IGF-1 levels have been shown to remove excess body fat.